Report: The Need to BuildDownload

The political ‘buck passing’ of the responsibility for unaffordable housing by successive governments in New Zealand has created extremely expensive housing markets in cities such as Auckland and Wellington – and a national housing crisis. Auckland is the sixth least affordable city among 92 major global housing markets, according to the 2020 Demographia housing survey. The real price of housing in New Zealand increased by 171% from 2000 to 2019, compared with just 11% in Germany in the same period. Despite former Housing Minister Phil Twyford’s reforms, the government has prioritised supressing demand and targeting financial speculation from overseas. Demand-side solutions are just tinkering at the edges of the problem. Long-term demographic transformations and changing household sizes are affecting overall housing demand. Inflexible housing development is the core problem, and only freeing up enough supply can solve our housing unaffordability and overcrowding.

Our housing needs are also set to rise much faster than population growth. The average annual number of dwellings needed based on just projected population growth, excluding the smaller household size, was between 5,452 (‘low’ migration and ‘low’ fertility) and 21,543 (‘medium’ migration and ‘high’ fertility) to 2060 in our analysis. The difference represents an annual shortfall of 9,867 dwellings for the former and 7,509 for the latter (or 64% and 26%, respectively). This means housing policy using only projected population growth will markedly underestimate future demand.

Covid-19 and the Reserve Bank of New Zealand’s monetary response to the ongoing recession has led to much financial capital flowing into the housing market. Consequently, the national house price average reached $725,000, an increase of 19.8% from October 2019 to October 2020. Low interest rates created incentives for greater borrowing and investments in real assets such as financial stocks and housing. However, if sound institutional arrangements were established and growing supply could meet growing demand, there would be far fewer speculative incentives.

Local councils and Statistics New Zealand already factor demographic changes in their household and dwelling projections, but the effect of the average household size on housing demand is rarely discussed in the public sphere. The aggregate housing demand is based not just on population growth, but also the composition of each household. With household sizes shrinking, fewer people living with many children, and population ageing, we have ‘empty nests’ and ‘crowded houses’. 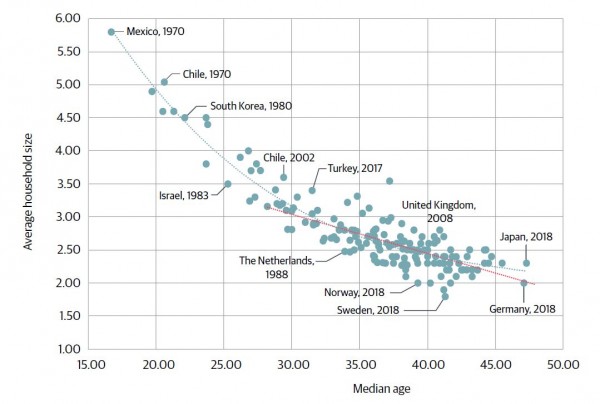 For this report, we calculated long-term population numbers using the demographic software Spectrum. Based on three fundamental factors – net migration, total fertility, and life expectancy – 36 scenarios were projected to 2060 (and 2038 for dwelling projections). In 33 out of the 36 scenarios, New Zealand’s population in 2060 will be larger than it is today. Under all 36 scenarios, the median age will be higher. The 36 scenarios were further narrowed to the six most plausible based on New Zealand’s recent demographic history. Among the six, the variation in median age and population size by 2060 was vast – the projected population ranged between 5.55 million and 7.26 million, while the median age was between 41.0 and 48.5 years. Even if migration is low (say, 14,000 per annum), New Zealand’s population will still grow substantially over the next few decades.

The current housing crisis is just the tip of the iceberg – if the government does not change course, future generations will face abysmal housing affordability prospects. Stopping migration completely would only produce new problems while doing little to fix the housing problem.

Demographic changes also have long-term implications for fiscal prudence. Under the six most plausible Spectrum scenarios, the dependency rate rose with population ageing, and the number of those over 65 years by at least 23% by 2060. This will result in fewer future taxpayers and more demands on working-age New Zealanders to fund public services such as healthcare and pensions.

Policymakers need to make our economic institutions more versatile so New Zealand can cope with any combination of demographic or household scenarios in the future. New Zealand had net zero migration in 2020 due to Covid-19 related border closures but this did not stop housing inflation. Politicians should stop blaming the housing crisis on migration, land banking investment, and speculation, and instead find policy solutions to free up urban development and housing supply. Faster productivity growth too would help fund additional public services in the long term.

Building now and fast is imperative for the nation’s future economic and social wellbeing.

Click below to download the two-page summary of The Need to Build: The demographic drivers of housing demand.

The Need to Build Report SummaryDownload